Fannr – Flickr Annotator – was a prototype application for assisting users in annotating their Flickr photos. Two types of annotation support is provided when annotating a single photo. 1) Tag recommendation, where the user is presented with a list of tags that they could consider adding to their photo. 2) Location recommendation, where the user is presented with several potential locations as to help them remember where the photo was taken. Both the tag-recommendation and the location recommendation is based on data from different social levels: the user’s own photos; the photos of the user’s contacts; everybody’s photos; and visually similar photos. Furthermore, for photos that have been localized the tag-recommendation is also based on geographically close-by photos. When the user has identified tags that they want to add to their photos or identified the location where the photo was taken, the Fannr prototype updates the annotation on the Flickr website using the Flickr API. 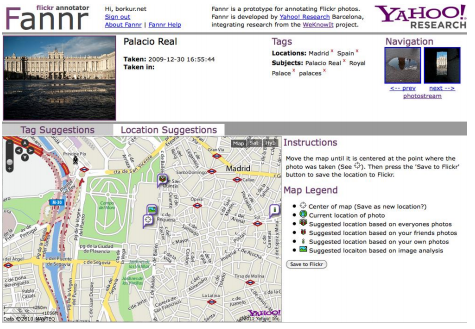