I woke up late on last Saturday morning and reached for my duct-tape glued-together glasses. I sighed. Remembering what was my task for the day. I had decided to go hunting for new glasses. I sighed again. Shopping is not exactly on the top of my list of fun things to do. I guess it is somewhere between waiting for the bus and cleaning the toilet.

Anyways … On the way to the first shop I thought about what I could do to make the glasses hunt more interesting. I got an idea. I thought I might take photos of some candidate frames and ask people to give me feedback. So I went. From one shop to another. Tried on different types of glasses and took some photos.

At the fourth shop I visited I had an interesting discussion with the girl serving me. I had asked her for some samples of glasses that had either heavier frame than my current glasses or no frame at all. I had tried on maybe about fifteen glasses and discarded all but two. One pair without a frame and a pair with a rather heavy frame. I kind-of liked both but I could not make up my mind. It was like comparing apples and oranges.

Seeing my puzzled face, the girl started to explain me my options. I could go for the frame-less glasses. That would be a conservative and safe choice that people would generally like. On the downside the glasses would make me look old and boring. I could go for the heavy frame glasses. That would make me look young and interesting. The choice would however be more progressive and it would take more time for people to get used to the new look.

I nodded my head. She had a point. Or rather. She had some interesting theories. Theories that could do with some testing. The scientist inside me giggled. Could I turn this shopping trip into an experiment? Let’s see …

Upon returning from my shopping expedition I chose 6 photos that would become a part of my experiment (see Figure 1).

I created a survey on SurveyMonkey where all six glasses were shown and people were asked to rate each pair on a 5-point Likert scale with the values “Super cool”, “Cool”, “OK”, “Uncool” and “Super uncool”. I posted the survey on my Facebook page and sent an email to a few friends and family members who are not on Facebook.

I received 28 responses to the survey. Each pair of glasses was rated by 25 — 28 people. The results can been seen in Figure 2. 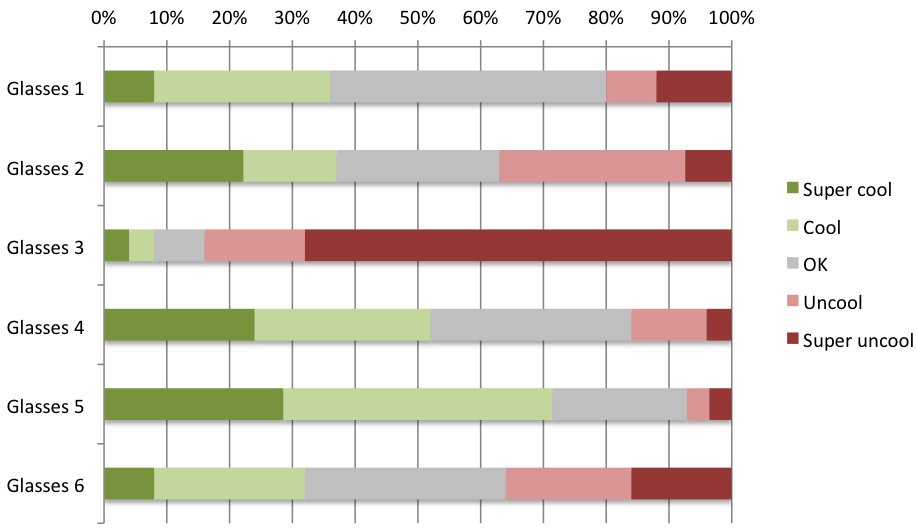 Moving on to the conservative frame-less boring glasses (Glasses 1 and 5). Both glasses get a positive response. Over 70% of the participants think Glasses 5 are either super-cool or cool and less than 10% think they are either uncool or super-uncool. Glasses 1 get a slightly worse rating but 80% think they are super-cool, cool, or at least OK.

From this small experiment I made two observations. First, light frames are generally accepted by friends and family. Second, heavy frames provoked a polarized reaction. These two observations support the remarks made by the shop assistant about one pair being conservative ant the other progressive.

Of course one has to be careful not to over interpret the results of this experiment. The experimental setup was flawed in the sense that the photos were not taken in the same lighting conditions. The results may not be statistically significant. It is not clear how the results generalize beyond me and my friends. Yada yada yada.

Anyways … Did the experiment help me in my task of buying new glasses? Yes and no. No, in the sense that I had already decided on which glasses to buy before posting the survey. Yes, in the sense that it made my shopping experience fun.

So … Have I got new glasses? No, not yet. Which ones will I go for? I decided to buy myself two pairs of glasses. One conservative pair and one progressive. One for each of my split personalities. The conservative-me will get Glasses 5 and the progressive-me will get Glasses 6 … or vice versa. We will have to wait and see how I alternate the glasses. Whether it will be based on mood, occasion or an unbiased coin.